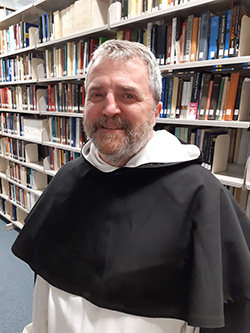 Election of the Provincial of the Dominican Friars

The Seventeenth Elective Chapter of the Dominican Province of the Assumption has gathered in St Dominic’s Priory, Camberwell in Melbourne to decide the future direction of the Province and to elect its officials.

On the 17th of May, the friars elected Father Dominic Murphy, O.P. as Prior Provincial for a four year term. He has been confirmed in office by the Master of the Order, Father Gerard Timoner III, O.P.

Father Dominic was born in 1965 in Melbourne and raised in St Clare’s Box Hill North. After completing secondary education at St Leo’s Christian Brothers College in Box Hill South, he then trained as a general nurse at St Vincent’s Hospital. In 1988 he moved into his grandfather’s old house in Dominic St, Camberwell, next to St Dominic’s Church, where he met the Dominican friars and began a friendship that would blossom into a vocation to the Dominican Order. After making his first profession of vows in 1993, he completed studies at Yarra Theological Union, including a Bachelor of Theology and Master of Theological Studies, he was ordained a priest in 1998.

After his ordination, Father Dominic’s first assignment was as a Chaplain at Trinity Catholic College, Auburn (1998-2000). He then worked as Vocations Promoter for the Province (2000-2012), as well as Chaplain at the University of Sydney (2005-2010), before being elected Prior of St Dominic’s Priory, Camberwell (2010-2016). During this time, Father Dominic also worked as Chaplain at Australian Catholic University (2011-2014) and assisted as Chaplain to the National Evangelization Team (NET). In 2017 Fr Dominic was appointed Parish Priest of the Parishes of St James’ Forest Lodge and St Bede’s, Pyrmont, and in 2019 also appointed Parish Priest of St Benedict’s, Broadway. In this time Fr Dominic was also Prior of St James’ Priory, Glebe (2017-2019).

“When I received news of the election, I initially felt thrown—and uncertain about how to respond. I was about to say Mass and had been reflecting on the Gospel of the day. But I had read the Lord’s words to his disciples, ‘my peace I give you,’” Fr Dominic said. “These words were said after the disciples had their feet washed by the Lord. My brothers have, in electing me, asked me to wash their feet—and how could I say no? It will now be my task to fulfil that mandate over the next four years.”