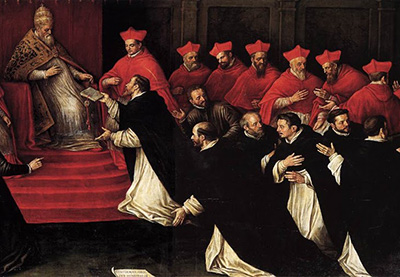 The Dominican Friars (priests and brothers) began as a religious Order in the south of France in the early 13th century. We were founded by Dominic Guzman. St. Dominic was born in Caleruega, Spain in 1170. A bright star is said to have shone on his forehead at baptism indicating the light that he was to become not only in himself but also through all those who would belong to his Order. When he went to Palencia at the age of fifteen to pursue higher studies at its famous school, soon to become a university, Dominic was already formed in mind and character – a man firmly grounded in the Faith. During the ten years as a student at Palencia, prayer and study filled his days. Even then his heart was full of compassion when he parted with his most prized possessions - his books - to buy food for the famine-stricken poor.

After priestly ordination, he spent ten years as a cathedral canon in Osma, where in silence, meditation and liturgical prayer, he was unknowingly being prepared for the great undertaking that Divine Providence had reserved for him.

While on a mission to Denmark with his bishop, Dominic encountered a number of people in the south of France who were beholden to the teachings of the Albigensian heresy. This group had erroneous ideas about God, about Jesus, about the goodness of all of God’s creation, and about how we should live our lives. Dominic began to preach to all people the true Gospel about God's infinite love for the world revealed in Jesus Christ who truly became one of us and lived among us.

His first conversion was that of an inn-keeper. Dominic spent the night conversing with him, and the morning light saw the man convinced of the Truth. It was the beginning of many such encounters and of a new life of apostolic preaching for Dominic, a life which would result in the foundation of a new religious order, the Order of Preachers.

Pope Honorius III on the 22nd of December, 1216, addressed a letter to Master Dominic and the preaching friars: “Considering that the brethren of your Order will be the champions of the Faith and the lights of the world, we confirm your Order, and we take it under our own government and protection.” A month later, the same Pontiff addressed to Dominic and his companions another letter in which he specified more clearly the work they were being commissioned by the Holy See to do: “By these Apostolic Letters, we enjoin and command that for the remission of your sins, you, putting your trust in the Lord, devote yourselves to preaching the Word of God in season and out of season, so that you may fulfil in a praiseworthy manner the apostolic mission entrusted to you.” The group was then sixteen in number with St. Dominic at its head.

Soon Dominic decided to disperse the brothers near and far. To those amongst them who regarded this dispersal with apprehension, he said: “I know what I am doing; the seed corrupts when it is stored up, but bears fruit when it is scattered.” God proved his servant to be right. At the founder’s death four years later, on the 6th August, 1221, the Order had 62 Priories; and twenty-five years later its members numbered 35,000.