A visitor to a Dominican church will generally notice that there are choir stalls either in front of or behind the main altar. Every day at certain times these stalls are occupied by the friars engaged in the recitation or singing of the Divine Office, also called the Liturgy of the Hours. The liturgy is the official public worship of the Church. It is the external expression on earth of the eternal Priesthood of Christ. Our Constitutions state that the brothers should take part in the mystery, contemplate it, and proclaim it through preaching to all so that they may be incorporated into Christ through the sacraments. The Dominican friar joins with his brothers in offering prayer and praise to the Father of mercies for the whole Church and for the needs of the world. 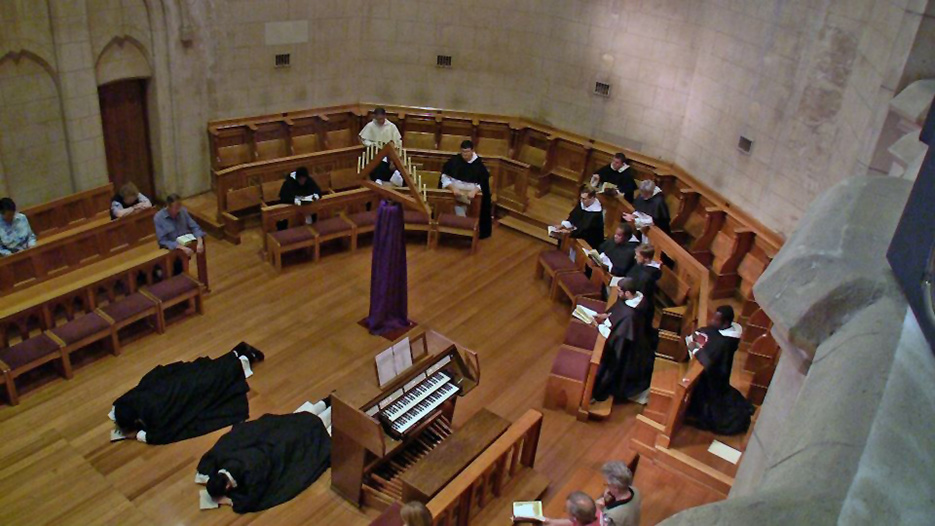 While monastic communities have always treasured the Liturgy of the Hours, the solemn chanting of the Divine Office has from early times also been the duty of cathedral clergy called canons. St Dominic, himself a canon at Osma, retained for his band of preachers this aspect of canonical life which had contributed greatly to his own preparation for the work of preaching. As a matter of fact, he and his brethren were at first known as canons and they surrendered this title only when the opponents of the Order used it with too much emphasis in an effort to exclude them from teaching in the universities. Both the canonical and monastic elements of Dominican life have been so harmoniously combined as to be suitably adapted to the attainment of the purpose for which the Order was founded, namely, preaching and the salvation of souls.

Since the Second Vatican Council, religious have tried to celebrate the hours of the liturgy at the appropriate times, so that they truly sanctify the whole of the day. Each Dominican community must decide, at a chapter meeting, the times of the day they will meet for the Divine Office. In smaller communities with heavy pastoral commitments, the brothers will meet only for the major hours. In this way, our liturgical prayer supports our preaching, and vice versa.

At the daily conventual Mass, which is the centre towards which all the liturgical prayer of the day converges, the brothers are gathered together in charity and united for the sacrifice of praise and thanksgiving which joins humanity to God. This liturgical font of wisdom and grace then overflows into the private prayer and devotions of the individual friars. These include preparation before and thanksgiving after Holy Communion, visits to the Blessed Sacrament, the recitation of the rosary, spiritual reading, and a daily examination of conscience. In this way, the life of the friar is animated by the same spirit which vivified the heart of Dominic who would frequently turn to his companions on the road and say, “You go ahead, let us think of the Saviour”, and fall behind to be alone. Like our holy founder, the friar is exhorted to pray unceasingly and to spend his days either speaking to God or about God.