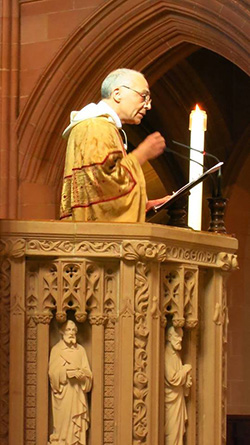 Following in the footsteps of St. Dominic, the friars are sent to preach the Gospel to all men and women, to all groups and peoples, to believers and unbelievers, and especially to the poor and downtrodden. Through the intercession of our holy founder, the preacher of grace, we strive to live out our consecration to the Word, to drink of the waters of wisdom, and to be so transformed by Christ that our hearts are set aflame with apostolic zeal for the spread of the Gospel.

The disciple of Christ, imitating the example of the Blessed Virgin Mary, offers, presents and gives Christ to humanity. He too is a God-bearer. Mary, the Virgin Mother of God, clothed Christ with bodily flesh; the preacher of the Gospel clothes Him with a body made of words. In both cases, Christ is the same Truth who teaches, enlightens and liberates humanity.

Thus, preaching makes the mystery of the Incarnation alive and active in the lives of men and women today. Through attentive listening to the Word by way of prayer and contemplation in silence and study, the Dominican friar is empowered to bear witness to how the word of God makes people more fully human and makes our communities capable of expressing that friendship which God wants to exist among us (Acts of the General Chapter, Trogir, 2013).

Preachers are first of all people of encounter and dialogue. It is reported in the Lives of the Brethren that Dominic, when he walked with pilgrims and wished to respond to their spiritual needs, invited his companions to prepare themselves to speak to them of Christ saying: “Let us kneel down and pray to understand them, so that we may be able to speak their own language and thus preach!” Thus the elements of apostolic encounter were pointed out: to meet, to pray, to listen, to dialogue, to understand, and then to preach (Acts of the General Chapter, Bogota, 2007).

Flowing from the wisdom acquired by years of prayer, study and community life, Dominican preaching is marked by its doctrinal soundness. Christian Truth is the same for all and may never be altered. Yet, the manner of presenting the eternal Truth of Christ must be tailored to the audience of the Preacher.

St. Dominic’s successor, Blessed Jordan of Saxony, was looked at with suspicion by the professors of the University of Paris, because they saw him snatch from them their most promising pupils by the eloquence of his words. When Blessed Jordan was in Vercelli, pupils were warned by Master Walter of Germany to avoid his sermons, lest they should be so captivated by his oratory that they would subsequently desire to follow him into the Order. Master Walter's own curiosity, however, got the better of him. Believing himself to be impervious to any spell that Blessed Jordan's eloquence might hold over him, he slipped off to hear him preach, only to surrender to the influence against which he had warned his own pupils and, with some embarrassment, beg admission into the Order. He was one of the seventy-two masters from the universities that Blessed Jordan clothed with the habit between 1224 and 1235.

Divine Providence in time also provided the sons of St. Dominic with one of the greatest aids to their words of preaching: the Rosary, which has been entrusted to the Order of Preachers since its earliest days. Blessed Bartolo Longo, a Lay Dominican, has written of the Rosary that: “Just as two friends, frequently in each other’s company, tend to develop similar habits, so too, by holding familiar converse with Jesus and the Blessed Virgin, by meditating on the mysteries of the Rosary and by living the same life in Holy Communion, we can become, to the extent of our lowliness, similar to them and can learn from these supreme models a life of humility, poverty, hiddenness, patience and perfection.” St. Dominic and his followers bring these virtues to the fore in carrying out the mandate to go forth and preach.