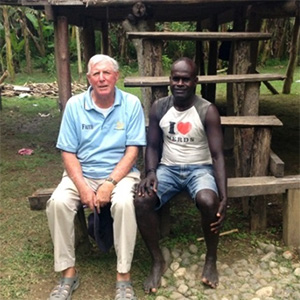 Important as the ordained ministry is, we should note that from the earliest days, the name “Holy Preaching” was applied not to an individual friar and his ministry, but to the community as a whole. Thus each friar who gives himself to the life and apostolate of the community lives the vocation of the preacher, whether he is ordained or not. The Dominican Order is proud to include within its ranks its cooperator brothers, who, without seeking priestly ordination, respond to the universal call to holiness inherent in the common priesthood of all the baptised.

Cooperator brothers preach the Gospel of truth by their whole way of life: by their word, their prayer and their work. They engage in their own apostolic endeavours and also work closely with the priests of the Order in making manifest the vision of St. Dominic. They bring their diverse and rich talents to the service of the mission of the Order.

The profession of obedience of a brother is expressed in various works. These include service as pastoral workers, bursars, archivists, liturgists, writers, chroniclers, counsellors, educators, cooks, infirmarians, gardeners and other forms of apostolic outreach. By their life of penance, prayer and sacrifice, the brothers call down from heaven the abundant graces of the mercy of God without which the word of the preacher would bear no fruit. Speaking in a vision one day to St. Vincent Ferrer, whose celebrated preaching revived religion throughout Europe in his time, Christ said: "It is not your eloquence that effects these numerous conversions, but the Rosary of the cooperator brother, your companion, who prays at the foot of the pulpit for the success of your preaching."

It is of the essence of the life of a Friar Preacher that either directly or indirectly he should give something to others towards their salvation. The spirituality of the co-operator brother encourages him to share in the privilege and responsibility of announcing the Kingdom of God to his other brothers, to those who come knocking on the priory door, to the poor and marginalised, and to those yearning to see the face of Christ. The prayer and preaching of the cooperator brother carried out in the spirit of St. Dominic and St. Martin de Porres, whether in the silence of the priory or the hustle and bustle of the city, enrich the character and mission of the “Holy Preaching”.

Included among the many Dominicans whom the Church has beatified or canonised are four cooperator brothers: Blessed Simon Ballachi, Saint John Macias, Saint Martin de Porres, and Blessed James of Ulm. Spiritual sons of St. Dominic, the cooperator brothers of today find in the Order the same means of holiness as in centuries past.